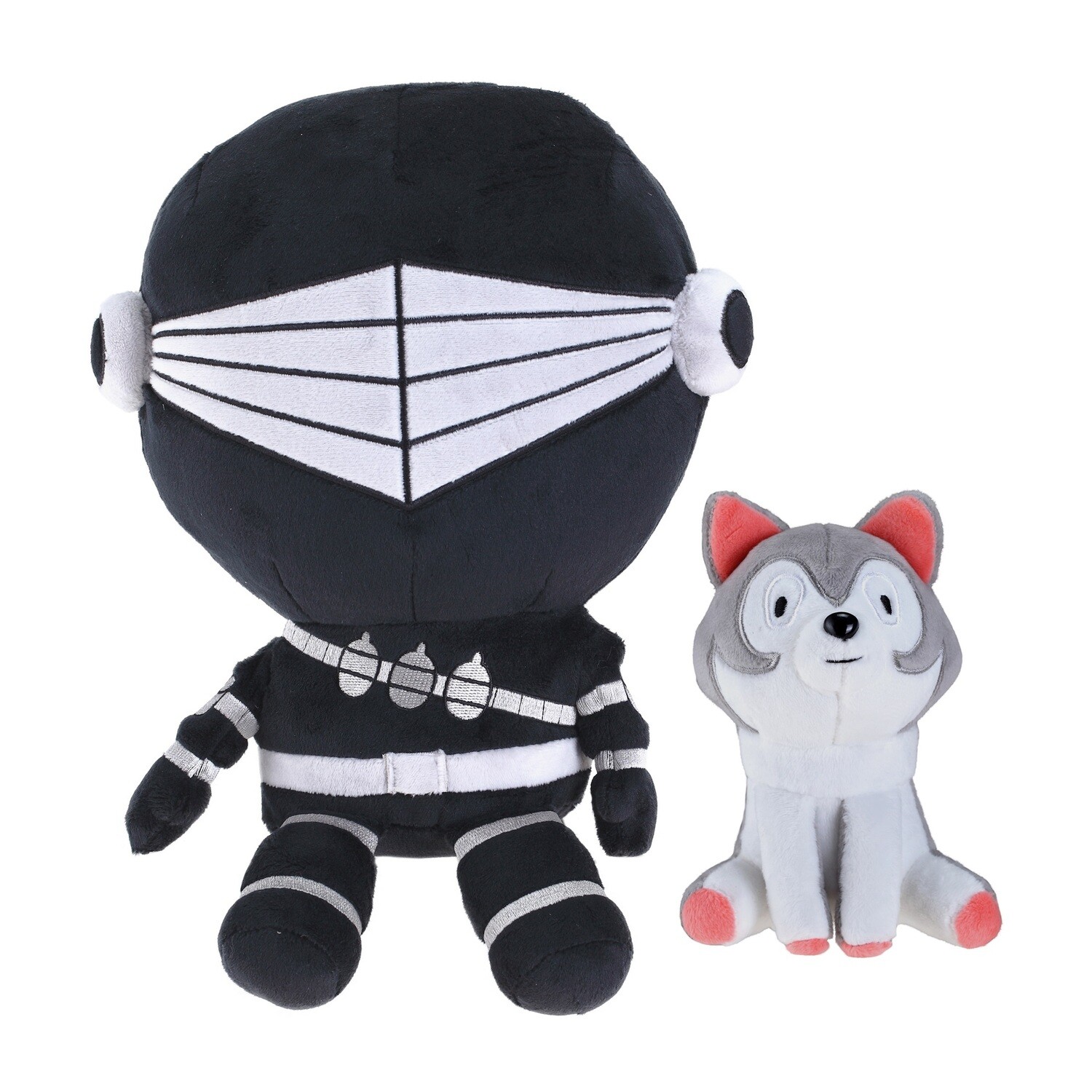 G.I. Joe Snake Eyes and Timber Plush. Snake Eyes is 12 inches tall with Timber around 5 inches and made with high quality soft minky fabric. Ages 3 and up. Licensed by Hasbro.

EXECUTIVE SUMMARY
Snake Eyes is a total mystery, but when it comes to G.I. Joe operations, he’s the best there is. Snake Eyes is a natural fighter with abilities that border on the supernatural. His unique blend of skill, stealth, Arashikage ninja training, and strength of character makes him an unparalleled combination: a hybrid ninja-commando who still hasn’t reached the limits of his potential or his true destiny as a warrior. Snake Eyes is devoted to his personal code and possesses an unbreakable resolve to live by it. Has black-belt-level ability in numerous hand-to-hand fighting systems and is highly skilled in the use of edged weapons.

PROFILE
Snake Eyes is a man with no name, no identity, and seemingly no past. Officially he doesn’t exist. If life is indeed a forge, then Snake Eyes has played blade, anvil, and hammer, enduring hardships that would have destroyed lesser men or stripped from them any compassion. Instead, his strength of character has withstood tragedy, and he has harnessed his immense force of will to become a blunt but powerful living weapon. A bond with Tommy Arashikage (aka Storm Shadow) brought him out of his mysterious past to train with the legendary Arashikage ninja clan. This training focused his energy, unlocked truths buried deep within, and taught him what it means to be a warrior, freeing him from the shadows of his past and sending him down a path of honor. Snake Eyes operates as a hybrid ninja-commando who possesses a rare skill set and an uncanny ability to survive. He continues to display extreme devotion to his principles and to those who have helped him along the way, including Tommy Arashikage, whom he considers a blood brother.

The mystery that surrounds Snake Eyes is amplified by the mask he wears, his signature black outfit, and his total silence. Details on why Snake Eyes does not speak are unconfirmed. Some say he has taken a warrior-monk's vow of silence. Others speculate he was injured in battle.
Additional intelligence links Snake Eyes to rumors of a mysterious hunter in the dense forests of the Pacific Northwest, traveling with a wolf and sporting a mysterious mark on his wrist. These reports have been confirmed: the wolf is referred to as “Timber” and has been known to accompany Snake Eyes on missions as a G.I. Joe animal operative.

G.I. Joe is a highly skilled, on-demand, international special missions force of men and women from around the globe, selected for their elite abilities in their chosen disciplines. Officially, G.I. Joe doesn’t exist, and very few know the truth: these heroes fight a secret war, as the first and last line of defense against forces that seek to plunge our world into chaos.

Legal:
Characters and events referenced here are fictional and are not intended to depict actual characters and events. G.I. Joe, the logo and all related characters are trademarks of Hasbro and are used with permission. © 2020 Hasbro. All rights reserved. Licensed by Hasbro. © 2020 Symbiote Studios LLC.